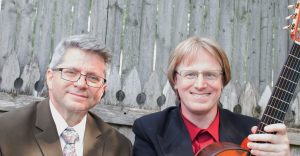 Mark Stachofsky grew up in Spokane, Washington. He received a Bachelor of Music degree from Boise State University where he studied Voice with Catherine Elliott, Opera with Dr. Lynn Berg, and was fortunate to participate in a Master Class given by the Great Baritone, Sherrill Milnes

Mark attended The Cleveland Institute of Music where he earned a Master of Music Degree with an emphasis on Vocal Performance. In his two years at the Institute Mark presented three solo recitals, sang Doctor Bartolo in The Marriage of Figaro by Mozart, and premiered works by composer Huston Dunleavy. Mark studied voice with Irvin Bushman, received coaching form Linda Jones, and Thomas Muraco, studied Opera under Andrew Foldi, and was able to work with some of the leading singers and collaborators of our time including Sheril Milnes, Waren Jones, Elly Ameling, Marilyn Horne, and Dawn Upshaw. While in Cleveland, Mark was employed by The Cleveland Opera Chorus and sang such rolls as Pinellino in Puccini’s Gianni Schicchi, one of the Lehrbube in Wagner’s Die Meistersingerand, and was priviledged to work under the batons of great conductors like; Imre Palló, Anton Coppola, and Stewart Copeland. In Cleveland, Mark helped to form the Tower City Singers, a vocal jazz sextet, performing exclusively for Tower City Center, Cleveland. Mark also formed the acapella group, Seasonal Sounds, which consisted of four voices singing traditional Christmas Carols at Shaker Square and for private parties.

More recently, Mark has been active singing with local arts organizations like The Fort Wayne Philharmonic, Bach Collegium Fort Wayne, Heartland Chamber Choral, and the Plymouth Players. Mark is on the Voice Faculty at Indiana University/Purdue University, Fort Wayne. He teaches Voice, English and Italian Lyric Diction, and assists with the Opera Ensemble. He is also a member of the National Association of Teachers of Singing.